What happens if a COVID-19 coronavirus pandemic hits? What will the repercussions be if the virus spreads worldwide? How will it change how we live, work, socialize and travel?

Don’t get all disaster-movie here. Some people seem to have the notion that a pandemic will mean shutting down borders, building walls, canceling all air travel and quarantining entire nations indefinitely. That is entirely incorrect. Containment attempts can slow down an outbreak and buy time to prepare, but if a pandemic hits, by definition, containment has failed and further attempts will be pointless, if not counterproductive. Rather:

Absolutely must-read. Peter Sandman and Jody Lanard are super clear thinkers and writers. I wish I had written this paragraph. Having said that, this describes a rational response, not necessarily the response all govs will take https://twitter.com/kakape/status/1231628955242958849 …

I’ve talked to risk communication experts Peter Sandman and Jody Lanard in past outbreaks and it is really worth reading this piece of theirs on @MackayIM‘s blog (another person worth following!) https://virologydownunder.com/past-time-to-tell-the-public-it-will-probably-go-pandemic-and-we-should-all-prepare-now/ …

176 people are talking about this

The focus will switch from containment to mitigation: slowing down how fast the virus spreads through a population in which it has taken root. Mitigation can occur via individual measures, such as frequent hand washing, and collective measures, such as “social distancing” — cancellations of mass events, closures, adopting remote work and remote education wherever possible, and so forth.

The slower the pandemic moves, the smoother the demands on health-care systems will be; the less risk those systems will have of becoming overloaded; the more they can learn about how best to treat the virus; and the greater the number of people who may ultimately benefit from a vaccine, if one is developed. I recommend the whole thread above this instructive graph:

CDC guidance urges flexibility in implementing mitigation measures, and continual re-assessment of their effectiveness as new information comes in. A “targeted, layered” approach that addresses current circumstances is the best practice.

The ultimate goal of such measures is to reduce the intensity of an outbreak, flattening out the epidemic curve and therefore reducing strain on the health system, and on social economic well-being (see this graphic representation). 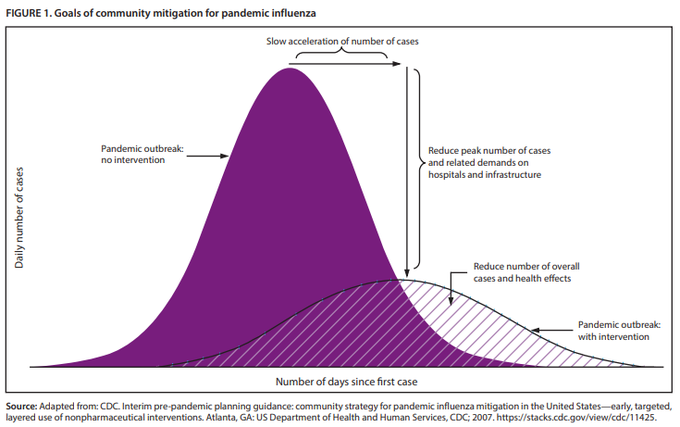 114 people are talking about this

An important question for those of us in the media is: how do we report on COVID-19 in this time of great flux and uncertainty? I hereby direct you to this excellent Scientific American piece by Harvard’s Bill Hanage and Marc Lipsitch: “How to Report on the COVID-19 Outbreak Responsibly.” (Disclosure: Bill is a personal friend.)

We think reporting should distinguish between at least three levels of information: (A) what we know is true; (B) what we think is true—fact-based assessments that also depend on inference, extrapolation or educated interpretation of facts that reflect an individual’s view of what is most likely to be going on; and (C) opinions and speculation […] facts about this epidemic that have lasted a few days are far more reliable than the latest “facts” that have just come out, which may be erroneous or unrepresentative and thus misleading. […] Distinguish between whether something ever happens and whether it is happening at a frequency that matters.

Read the whole thing. As an opinion columnist, I’m on pretty safe ground, in that everything I write is definitionally (C) in the above taxonomy… but basically everything I’m citing counts as (B).

Which includes the following statement: when I say “if a” in the first paragraph above, I really mean “when the.” A pandemic is coming. I recognize that may sound like irresponsible scaremongering. I strongly encourage you to be skeptical, to read widely, and to draw your own conclusions. But the clamor of expert voices is growing too loud to ignore. Here’s an entire Twitter thread linking to epidemiologists at Harvard, Johns Hopkins, and the Universities of Basel and Bern, saying so with very little ambiguity:

Round up of (assistant) profs of infectious disease spread saying we’re likely past being able to contain coronavirus, i.e. headed for a pandemic and mitigation (NOT saying containment efforts are now pointless): @mlipsitch https://twitter.com/mlipsitch/status/1231426205322301447 …
1/2…

As the world’s view of the #COVID19 spread turns from containable outbreak to pandemic, the clear next question is what countermeasures can be used. Categorizing these can be helpful.

47 people are talking about this

Don’t panic. There is a great deal we can and will do to limit and mitigate this pandemic. It’s all too easy to imagine fear becoming far more dangerous than the virus itself. Don’t let that happen. It’s also worth noting that its mortality rate is likely significantly lower than the headline 2%, not least because that doesn’t include mild undiagnosed cases:

15. That is a critical piece of information & could change our view of #COVID19 substantially. It’s not a nice disease, but it’s probably not as bad as it currently looks.

15. Think of an iceberg. With #COVID19, it’s easy to see the deaths/serious cases. But people with mild illness don’t go to hospital/don’t get tested. Studies have to be done to find them. We need a clearer picture. If the data exist, share. If they don’t, generate them. 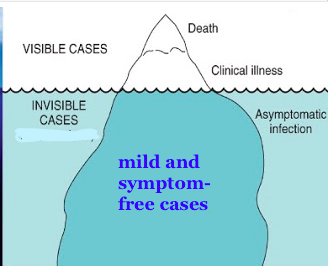 349 people are talking about this

Let me pick up, where I left off yesterday: As #covid19 efforts shift from containment to mitigation, we have a window of opportunity to prepare the world. What does that mean?

257 people are talking about this

Unless all of those people cited above are wrong, which seems highly unlikely, we will all spend the next weeks and months sharing the very strange collective experience of watching — through our laptops, phones, Twitter and mass media — the spread of this pandemic through much of the world in what will seem like slow motion. Our day-to-day lives are ultimately likely to change somewhat. (If your office job isn’t remote-work-friendly today, I assure you, it will be this time next year.) But it will be very far from the end of the world. I suspect we’ll all be surprised by how soon it begins to feel almost normal.

Learn the secrets of funding your startup