By GEORGE MARTIN FOR MAILONLINE

These horrifying images show a a dead dolphin that washed up on a beach with a diaper stuck in its mouth and a broken jaw.

Tourists and fishermen, who spotted the washed-up striped dolphin with the man-made waste still attached to its teeth, believe it died from suffocation.

The mammal was found on the Bacocho beach in the municipality of Puerto Escondido, in the southern Mexican state of Oaxaca. 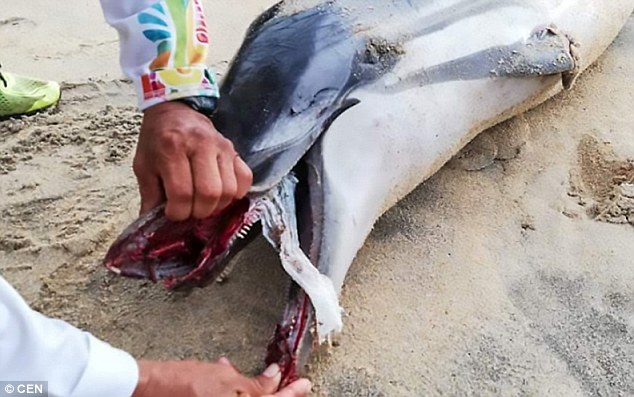 Local media report San Pedro Mixtepec Clean Beaches Committee, who found the female dolphin, said it had received blows all over its body and injuries to its fins as well as a broken jaw.Dailymail.co.uk: News, Sport, Showbiz, Celebrities from Daily MailPauseNext video0:42 / 2:01SettingsFull-screenRead More

Mexican authorities, among them the Federal Prosecution for the Environment Protection (PROFEPA) and the secretary of Environmental and Natural Resources along with the Sea University are investigating the case in order to discover the cause of the death of the mammal.

Authorities have now removed the dolphin’s body from the beach.

The striped dolphin inhabits temperate or tropical, off-shore waters and is found in abundance in the North and South Atlantic Oceans, including the Mediterranean, the Gulf of Mexico, the Indian Ocean and the Pacific Ocean.

Mexican authorities, among them the Federal Prosecution for the Environment Protection (PROFEPA) are now investigating

More: Dolphin is found suffocated to death by a DIAPER that got caught in its teeth and throat while it swam off the coast of Mexico