(CNN)Hundreds of mysterious fast radio bursts have been detected in space thanks to a Canadian telescope and an international group of researchers.The origins of these bright, millisecond-long flashes of light are unknown because the bursts, or FRBs, are unpredictable and vanish quickly. Scientists first observed them in 2007. In the decade following, they only observed about 140 bursts across the universe.”The thing about FRBs is that they are really hard to catch,” said Kiyoshi Masui, assistant professor of physics at MIT and member of the university’s Kavli Institute for Astrophysics and Space Research. “You have to have your radio telescope pointed at just the right place at just the right time and you can’t predict where or when that will be.”

Most radio telescopes only see a patch of sky the size of the moon at a given time, meaning the vast majority of FRBs go unseen, Masui said.https://ce0efc0873dde1ca7b8b6496cd324bbb.safeframe.googlesyndication.com/safeframe/1-0-38/html/container.html

That all changed when the CHIME telescope, located at the Dominion Radio Astrophysical Observatory in British Columbia, Canada, began receiving radio signals in 2018 during its first year of operation. 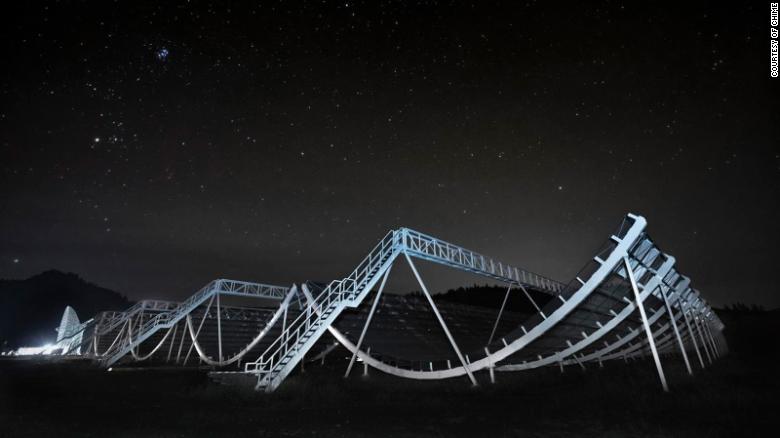 Not only does the catalog expand on the known number of fast radio bursts, but it also broadens the information available about their locations and properties. While most of the fast radio bursts occurred just once, 61 of them were repeating fast radio bursts from 18 sources. The repeating bursts appear differently — each flash lasts a little longer than the single bursts.When a burst repeats, scientists have a much better chance of tracing it back to its point of origin. These locations could help scientists determine what causes the bursts as well.

Fast radio burst may have come from the Milky WayBased on their observations, the researchers believe that single fast radio bursts may have sources that are different from repeating ones.”With all these sources, we can really start getting a picture of what FRBs look like as a whole, what astrophysics might be driving these events, and how they can be used to study the universe going forward,” said Kaitlyn Shin, CHIME member and a graduate student in the Massachusetts Institute of Technology’s Department of Physics, in a statement.

The CHIME telescope functions a bit differently from others used for radio astronomy. The array of four giant radio antennas, comparable to the size and shape of half-pipes used for snowboarding, are entirely motionless. As Earth rotates on its axis, this array receives radio signals from half of the sky.Typically, radio dishes move to capture light from different areas in the sky. Instead, CHIME uses an all digital design and has a correlator, a digital signaling processor to capture incoming radio signals. It can churn through massive amounts of data — about 7 terabits per second, or the equivalent of a small percentage of global internet traffic.

Mysterious fast radio bursts traced to spiral galaxy arms“Digital signal processing is what makes CHIME able to reconstruct and ‘look’ in thousands of directions simultaneously,” Masui said. “That’s what helps us detect FRBs a thousand times more often than a traditional telescope.”The 535 bursts detected by CHIME came from all parts of the sky — and space. Based on the information they gathered, the researchers calculated that these bright fast radio bursts likely occur about 800 times per day across the entire sky.”That’s kind of the beautiful thing about this field — FRBs are really hard to see, but they’re not uncommon,” Masui said. “If your eyes could see radio flashes the way you can see camera flashes, you would see them all the time if you just looked up.”While these bursts would be intriguing enough based on their mysterious nature alone, scientists also believe they can use the bursts to have a better understanding of the universe and even map the distribution of gas across it.Sign up for CNN’s Wonder Theory science newsletter. Explore the universe with news on fascinating discoveries, scientific advancements and more.When these radio waves travel through space, it’s likely they’re encountering gas or plasma. This can distort the waves, change their properties and even their trajectory. Determining this information about a radio burst could help scientists estimate the distance it traveled and how much gas it encountered.”This carries a record within it of the structure of the universe that it has traveled through on its way to get from the source to us,” Masui said. “Because of this, we think that they are going to be the ultimate tool for studying the universe.”Many of these bright radio bursts detected by CHIME traveled from distant galaxies and were likely created by incredibly energetic sources — but researchers are still trying to determine the exact nature of those sources. 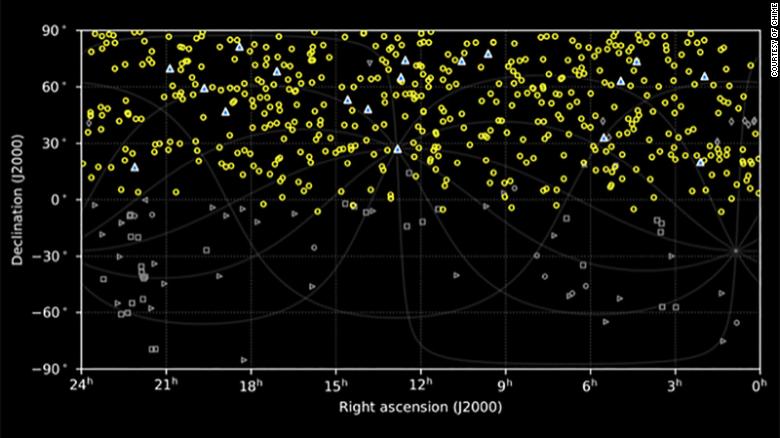 With enough fast radio bursts, it may be possible to map out the large-scale structure of the universe.”These large structures make up the filaments of the cosmic web,” said Alex Josephy, a doctoral student in physics at McGill University in Canada. “With the FRB catalog, we have detected this correlation between FRBs and large-scale structure. This is really, really exciting and ushers in a new era of (fast radio burst) cosmology.”