Global population growth may peak sooner than expected if the lot of women continues to improve, according to a study that says the world’s population could be 2 billion below UN forecasts by the end of the century.

Such a fall would remove some of the projected strain on natural resources but would present governments with stark policy choices over migration and the economy.

The world’s population will peak at 9.7 billion in 2064 and decline to 8.8 billion by the end of the century, according to research led by the University of Washington in the US and published in the Lancet.

It says some countries, including Japan, Spain and Italy, will see their populations halve, while sub-Saharan Africa’s population will triple in the next 80 years.

The number of older people will overtake the young, with 2.4 billion people over the age of 65 forecast by 2100, compared with 1.7 billion under the age of 20.

The major factors in shrinking the population are widening access to contraception and improvements in educating women and girls. If those trends are curtailed, higher growth will ensue. For instance, although sub-Saharan Africa’s population is projected to soar, its fertility rates are forecast to decline from 4.6 births per woman in 2017 to 1.7 by 2100. If that decline in fertility should fail to materialise, the overall growth will be much greater.

Christopher Murray, the director of the Institute for Health Metrics and Evaluation (IHME) at the University of Washington in Seattle, the lead author of the research, said this opened up the potential for negative consequences if governments chose coercive policies over embracing immigration.

“The best solutions for sustaining current population levels, economic growth and geopolitical security are open immigration policies and social policies supportive of families having their desired number of children,” he said. “However, a very real danger exists that, in the face of declining populations, some countries might consider policies that restrict access to reproductive health services, with potentially devastating consequences. It is imperative that women’s freedom and rights are at the top of every government’s development agenda.” 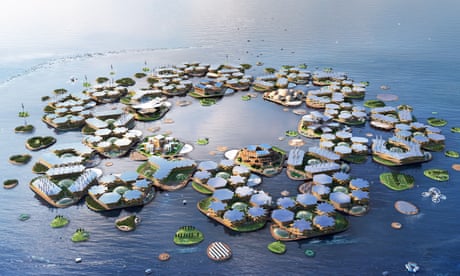 Seasteading – a vanity project for the rich or the future of humanity?

Stein Emil Vollset, also of the IHME, and first author of the paper, said the changes to population structure would pose particular dilemmas. “While population decline is potentially good news for reducing carbon emissions and stress on food systems, with more old people and fewer young people, economic challenges will arise as societies struggle to grow with fewer workers and taxpayers, and countries’ abilities to generate the wealth needed to fund social support and healthcare for the elderly are reduced,” he said.

Migration must be a large part of the future, the authors suggested, as without more liberal immigration policies the populations of 23 countries are forecast to halve, among them Japan, Thailand, Italy and Spain.

Standing still is not an option, according to Ibrahim Abubakar, a professor of epidemiology at University College London, who was not involved in the study. “The current populist narrative of the value of ethnic cohesion to justify migration curbs will be challenged by deteriorating living standards,” he warned in a comment also published in the Lancet. “Nations would have to cooperate at levels that have eluded us to date … the choice we face is whether we improve health and wealth by allowing planned population movement, or if end up with an underclass of imported labour and unstable societies.”

The standard estimate used by many countries comes from a report in 2017 by the UN Population Division, suggesting a global population of 10 billion by 2050 and 11 billion by 2100. The new study took a different model, with a much closer concentration on changes to the drivers of fertility, such as education levels and contraception availability, in contrast to traditional models that extrapolate in a simpler way from past trends.

The authors considered the impacts of the coronavirus crisis, and forecast that it would make no appreciable difference to population in the longer term.

Kevin McConway, emeritus professor of applied statistics at the Open University, who was not involved with the research, praised the modelling but warned that much would depend on policy and behaviour. “Rather than simply making assumptions about how fertility will change in the future, this team has used data from past years to describe how fertility varies with the factors that determine it, particularly women’s access to education and to modern contraception,” he explained.

“Whether that provides a stronger basis for fertility forecasts does depend on how easy it is to make plausible assumptions about access to education and contraception decades from now. It also depends on the extent to which the relationship between fertility on the one hand, and access to education and modern contraception on the other, works in a similar way in the future as it did in the past.”

The modellers were also unable to take detailed account of climate predictions, which could be a big factor in future, he added. “Some climate change models, for some countries at least, have predicted very major environmental change during the period covered by these population forecasts, and the population forecasters mention specifically that this may have important effects on migration patterns that are not included in their results.”

1 thought on “World population in 2100 could be 2 billion below UN forecasts, study suggests”