This land is your landDrought

Intensified by climate change, the current 20-year arid period is one of the worst on record, with wide-ranging effects 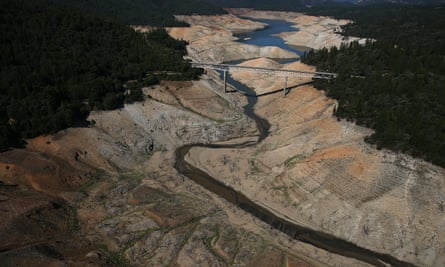 The Enterprise Bridge passes over a section of Lake Oroville that is nearly dry in 2014 in Oroville, California. The region is in the grip of a 20-year megadrought, research suggests. Photograph: Justin Sullivan/Getty Images

When Ken Pimlott began fighting US wildfires at the age of 17, they seemed to him to be a brutal but manageable natural phenomenon. 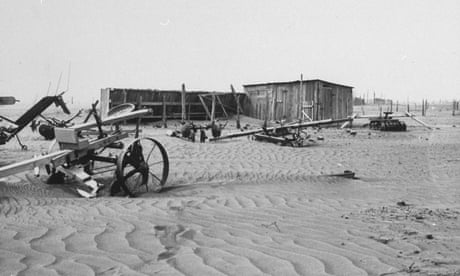 “We had periodic [fire] sieges in the 80s, but there were breaks in between,” said Pimlott, the former head of the California department of forestry and fire protection. But no longer. “That doesn’t really happen any more. Now you can’t even blink” between fires, he said. “We’re seeing the kinds of fires we have never seen before.”

A recent study published in the journal Science helps explains why, revealing that the south-western US is in the grip of a 20-year megadrought – a period of severe aridity that is stoking fires, depleting reservoirs and putting a strain on water supplies to the states of the region.

Researchers compared soil moisture records from 2000-2019 to other drought events from the past 1,200 years. They found that the current period is worse than all but one of five megadroughts identified in the record.

Unlike past megadroughts – brought on by natural fluctuations in the Earth’s climate – this current drought has been heavily influenced by human-induced climate change, “pushing what would have been a moderate drought in south-western North America into megadrought territory”, according to the study.

“Global warming has made the drought much worse than it otherwise would have been,” said Cook. “We estimate 30-50% is attributed to climate change.”

According to Nasa, 19 of the 20 warmest years on record have occurred since 2001. Climate change, if unchecked, will hit the American south-west particularly hard.

A major concern is the megadrought’s impact on water supplies in the region. It has experienced explosive growth – half of the nation’s fastest-growing states are in the south-west – made possible by elaborate river diversion projects and massive reservoirs.

Over the past two decades, drought-depleted rivers, and population growth has led to steep declines in two of the nation’s largest reservoirs, Lake Mead and Lake Powell, on which which tens of millions of people depend.

Water deliveries from the Colorado River are also being rationed this year, for the first time.

For Pimlott, this drought has manifested itself in 21st-century fires unlike any he had previously witnessed. In 2018, a fire tornado destroyed part of one northern California town, and almost the entire community of Paradise, California, was wiped out by a blaze that claimed 85 victims.

“Were seeing more intense fires, with longer durations,” he said.