Scientists recently modeled a range of interactions between energy-intensive civilizations and their planets. The results were sobering.

The universe does many things. It makes galaxies, comets, black holes, neutron stars, and a whole mess more. We’ve lately discovered that it makes a great deal of planets, but it’s not clear whether it regularly makes energy-hungry civilizations, nor is it clear whether such civilizations inevitably drive their planets into climate change. There’s lots of hope riding on our talk about building a sustainable civilization on Earth. But how do we know that’s even possible? Does anyone across the cosmos ever make it?

Remarkably, science has now advanced to point where we can take a first step at answering this question. I know this because my colleagues and I have just published a first study mapping out possible histories of alien planets, the civilizations they grow, and the climate change that follows. Our team was made up of astronomers, an earth scientist, and an urban ecologist.

It was only half-jokingly that we thought of our study as a “theoretical archaeology of exo-civilizations.” “Exo-civilizations” are what people really mean when they talk about aliens. Astronomers refer to the new worlds they’ve discovered as “exoplanets.” They’re now gearing up to use the James Webb Space Telescope and other instruments to search for life by looking for signs of “exo-biospheres” on those exoplanets. So if we have exoplanets and exo-biospheres, it’s time to switch out the snicker-inducing word “aliens” for the real focus of our concerns: exo-civilizations.

We’re interested in how exo-civilizations develop on their planets. Given that more than 10 billion trillion planets likely exist in the cosmos, unless nature is perversely biased against civilizations like ours, we’re not the first one to appear. That means each exo-civilization that evolved from its planet’s biosphere had a history: a story of emergence, rising capacities, and then maybe a slow fade or rapid collapse. And just as most species that have ever lived on Earth are now extinct, so too most civilizations that emerged (if they emerged) may have long since ended. So we’re exploring what may have happened to others to gain insights into what might happen to us.

Of course, we have no direct evidence relating to any exo-civilizations or their histories. What we do have, however, are the laws of planets. Our robot emissaries have already visited most of the worlds in the solar system. We’ve set up weather stations on Mars, watched the runaway greenhouse effect on Venus, and seen rain cascade across methane lakes on Titan. From these worlds we learned the generic physics and chemistry that make up what’s called climate. We can use these laws to predict the global response of any planet to something like an asteroid impact or perhaps the emergence of an energy-hungry industrial civilization.

To launch our science of exo-civilizations we started with those laws of planets, building the right equations to capture the intertwined evolution of a planet and its young civilization. But planetary laws of physics and chemistry only tell part of the story. If we want to know the possible fates of other civilizations on other worlds, we had to bring some biology to bear too.

Science fiction has given us enduring images of alien races. Not surprisingly, most of them look a lot like us but with different kinds of foreheads or ears, or a different number of fingers on their hands. In developing our first cut at a science of exo-civilizations, my collaborators and I weren’t interested in what aliens might look like or what kind of sex they have. To do our job we had to avoid the specifics of both their individual biology and their sociology because science provides us little to work with on those fronts. There was, however, one place where biology was up to the task.

Population biology was a radical new field back in the early 20th century. Rather than just collecting statistics to describe animal populations, a few ambitious researchers like Alfred Lotka wanted to create basic mathematical models of things like predators and prey to predict the evolution of their linked populations. Predators (like wolves) eat prey (like bunnies) so they can make more wolf babies, thereby increasing the wolf population. Bunnies do a fine job of reproducing on their own, but if too many are eaten, their population numbers suffer. Today, population biologists, ecologists, and their compatriots use mathematical models to study everything from the spread of disease to the propagation of invasive species. The approach has even found its way to the study of human civilizations, including their collapse in places like Easter Island.

We used these tools to build a simple model for the evolution of a civilization with its planet. In our approach, the exo-civilization’s population and the planetary environment are braided together by energy use and its consequences. The planet gives the civilization energy resources. The civilization consumes them to do the work of civilization building. As a civilization harvests more power from the planet, its capacities soar. That includes the ability to make and feed more babies. This link between available energy (in the form of food for simple organisms) and rising birth rates is fundamental to population biology. And for human civilization the steep rise we’ve seen in population is closely tied to fertilizer involving fossil-fuel use. So greater energy will, in the beginning, mean bigger populations. But there’s no free lunch from a planetary perspective. Using all that energy has to result in feedback on the planet. That’s what we earthlings are just starting to see with climate change. If global warming gets really nasty, everything from energy harvesting to food production is going to get severely stressed and our large human population won’t be sustainable. That’s why our exo-civilization models linked rising planetary impacts with population declines. It was all pretty straightforward, requiring no assumptions about alien economics, sociology, or any other science-fiction ideas.
But to allow for some choice on the part of the exo-civilization we also included a basic switch describing how the civilization could respond to changing planetary conditions. For the sake of simplicity, we imagined that the planet had just two kinds of energy resources. One had a high planetary impact (like fossil fuels). The other had low impact (like solar energy). In some models we allowed the civilization to switch from to one to the other as things got bad.

In many ways we were seeing a kind of cosmic Easter Island play out. There may have been as many as 10,000 people living on Easter Island at the peak of its stone-head-making heyday. But by cutting down all the trees to roll the stone heads around, that civilization seems to have mucked up its ecosystem and sealed its own fate. When the Dutch arrived in 1722 only a few thousand folks, living greatly reduced lives, were left.

The second kind of trajectory held the good news. We called it the “soft landing.” The population grew and the planet changed but together they made a smooth transition to new, balanced equilibrium. The civilization had changed the planet but without triggering a massive die-off.

The final class of trajectory was the most worrisome: full-blown collapse. As in the die-off histories, the population blew up. But these planets just couldn’t handle the avalanche of the civilization’s impact. The host worlds were too sensitive to change, like a houseplant that withers when it’s moved. Conditions on these planets deteriorated so fast the civilization’s population nose-dived all the way to extinction.

You might think switching from the high-impact energy source to the low-impact source would make things better. But for some trajectories, it didn’t matter. If the civilization used only the high-impact resource, the population reached a peak and then quickly dropped to zero. But if we allowed the civilization to switch to the low-impact energy resource, the collapse still happened in certain cases, even if it was delayed. The population would start to fall, then happily stabilize. But then, finally and suddenly, it rushed downward to extinction. 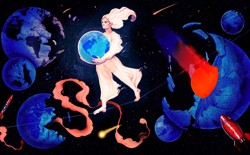 The collapses that occurred even when the civilization did the smart thing demonstrated an essential point about the modeling process. Because the equations capture some of the real world’s complexity, they can surprise you. In some of the “delayed collapse” histories, the planet’s own internal machinery was the culprit. Push a planet too hard, and it won’t return to where it began. We know this can happen, even without a civilization present, because we see it on Venus. That world should be a kind of sister to our own. But long ago Venus’s greenhouse effect slipped into a runaway mode, driving its surface temperatures to a hellish 800 degrees Fahrenheit. Our models were showing, in generic terms, how a civilization could push a planet down the hill into a different kind of runaway through its own activity.

The model we created was, however, just a first stab at a science of exo-civilizations. We made the equations a simple as possible while still capturing the essence of planet-civilization “coevolution.” That means it’s too early to answer the question, “Does anyone make it?” Still, our work provides the basic contours of what might happen.

We need to put in more detailed and realistic climate physics. We also need to include the full range of energy sources a young civilization might find on its home world—the list is limited by physics: combustion, solar, wind, geothermal, tides, nuclear, and a few others. Even though our initial models were simple, they still revealed a radical truth about the challenge we face as we push the Earth into its human-dominated era. Unless the universe is deeply biased against it, there have been other civilizations across space and time that faced these challenges. Anthropocenes may be common.

As I explore in my new book, Light of the Stars: Alien Worlds and the Fate of the Earth, our dawning realization that we are profoundly shaping Earth’s future provides us with the impetus to stop acting like cosmic teenagers with power but little wisdom. From that perspective the true narrative of climate change isn’t some small, local drama of Democrats vs. Republications or business interests vs. environmentalists. Instead, it’s a cosmic test, one that gives us a chance to join those who successfully crossed this burning frontier—or the chance to be consigned to the scrap heap of civilizations too shortsighted to take care of their own planet.

3 thoughts on “How Do Aliens Solve Climate Change?”