JOAL, Senegal — Once upon a time, the seas teemed with mackerel, squid and sardines, and life was good. But now, on opposite sides of the globe, sun-creased fishermen lament as they reel in their nearly empty nets.

“Your net would be so full of fish, you could barely heave it onto the boat,” said Mamadou So, 52, a fisherman in Senegal, gesturing to the meager assortment of tiny fish flapping in his wooden canoe.

A world away in eastern China, Zhu Delong, 75, also shook his head as his net dredged up a disappointing array of pinkie-size shrimp and fledgling yellow croakers. “When I was a kid, you could cast a line out your back door and hook huge yellow croakers,” he said. “Now the sea is empty.”

Overfishing is depleting oceans across the globe, with 90 percent of the world’s fisheries fully exploited or facing collapse, according to the United Nations Food and Agriculture Organization. From Russian king crab fishermen in the west Bering Sea to Mexican ships that poach red snapper off the coast of Florida, unsustainable fishing practices threaten the well-being of millions of people in the developing world who depend on the sea for income and food, experts say.

But China, with its enormous population, growing wealth to buy seafood and the world’s largest fleet of deep-sea fishing vessels, is having an outsize impact on the globe’s oceans.

Having depleted the seas close to home, Chinese fishermen are sailing farther to exploit the waters of other countries, their journeys often subsidized by a government more concerned with domestic unemployment and food security than the health of the world’s oceans and the countries that depend on them.

Increasingly, China’s growing armada of distant-water fishing vessels is heading to the waters of West Africa, drawn by corruption and weak enforcement by local governments. West Africa, experts say, now provides the vast majority of the fish caught by China’s distant-water fleet. And by some estimates, as many as two-thirds of those boats engage in fishing that contravenes international or national laws.

China’s distant-water fishing fleet has grown to nearly 2,600 vessels (the United States has fewer than one-tenth as many), with 400 boats coming into service between 2014 and 2016 alone. Most of the Chinese ships are so large that they scoop up as many fish in one week as Senegalese boats catch in a year, costing West African economies $2 billion a year, according to a new study published by the journal Frontiers in Marine Science.

Many of the Chinese boat owners rely on government money to build vessels and fuel their journeys to Senegal, a monthlong trip from crowded ports in China. Over all, government subsidies to the fishing industry reached nearly $22 billion between 2011 and 2015, nearly triple the amount spent during the previous four years, according to Zhang Hongzhou, a research fellow at Nanyang Technological University in Singapore.

That figure, he said, does not include the tens of millions in subsidies and tax breaks that coastal Chinese cities and provinces provide to support local fishing companies.

According to one study by Greenpeace, subsidies for some Chinese fishing companies amount to a significant portion of their income. For one large state-owned company, CNFC Overseas Fisheries, the $12 million diesel subsidy it received last year made the difference between profit and loss, according to a corporate filing.

“Chinese fleets are all over the world now, and without these subsidies, the industry just wouldn’t be sustainable,” said Li Shuo, a global policy adviser at Greenpeace East Asia. “For Senegal and other countries of West Africa, the impact has been devastating.”

In Senegal, an impoverished nation of 14 million, fishing stocks are plummeting. Local fishermen working out of hand-hewn canoes compete with megatrawlers whose mile-long nets sweep up virtually every living thing. Most of the fish they catch is sent abroad, with a lot ending up as fishmeal fodder for chickens and pigs in the United States and Europe.

The sea’s diminishing returns mean plummeting incomes for fishermen and higher food prices for Senegalese citizens, most of whom depend on fish as their primary source of protein.

“We are facing an unprecedented crisis,” said Alassane Samba, a former director of Senegal’s oceanic research institute. “If things keep going the way they are, people will have to eat jellyfish to survive.”

When it comes to global fishing operations, China is the indisputable king of the sea. It is the world’s biggest seafood exporter, and its population accounts for more than a third of all fish consumption worldwide, a figure growing by 6 percent a year. 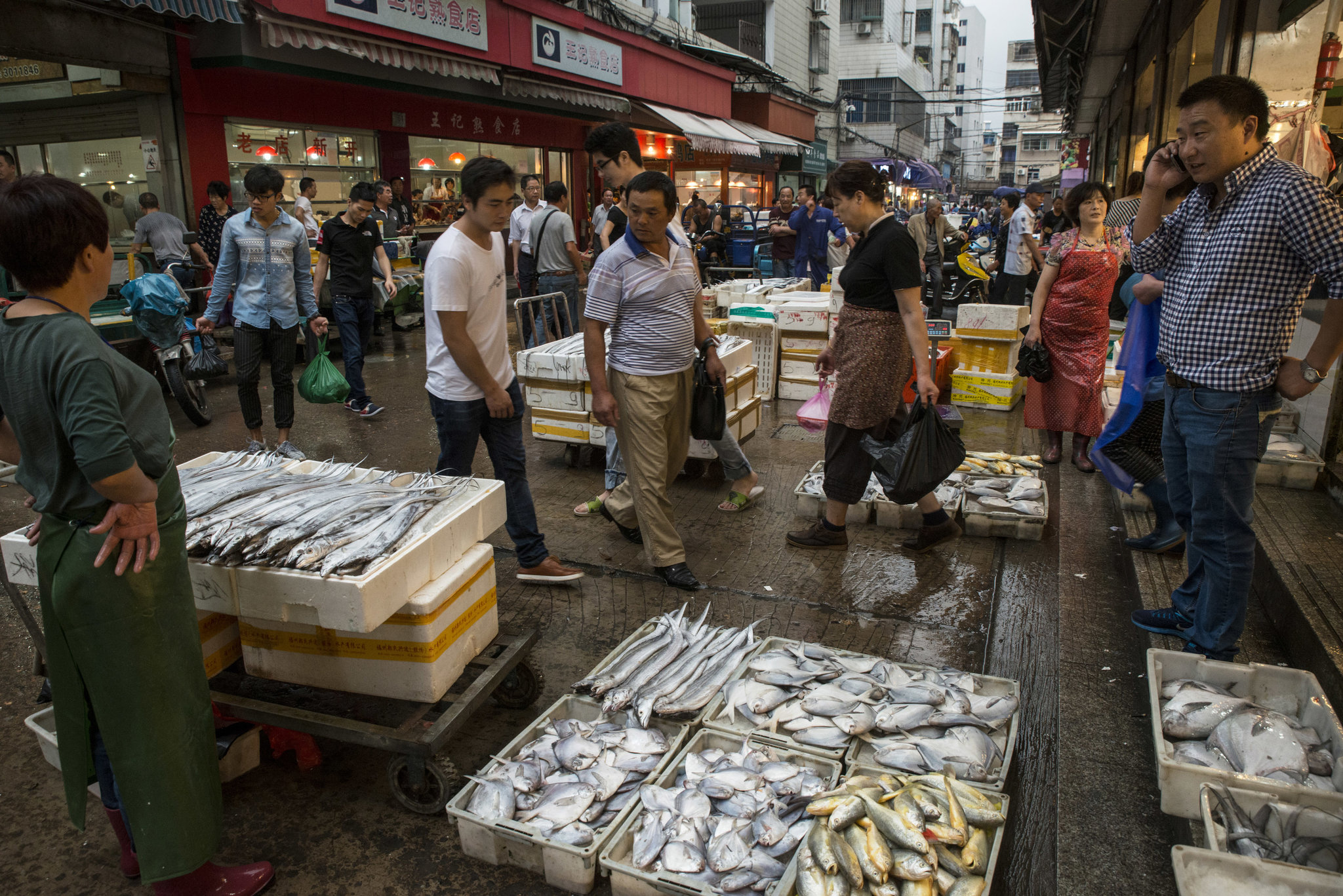 Buyers and sellers at Zhoushan fish market. China has depleted the seas close to home. CreditGilles Sabrie for The New York Times

The nation’s fishing industry employs more than 14 million people, up from five million in 1979, with 30 million others relying on fish for their livelihood.

“The truth is, traditional fishing grounds in Chinese waters exist in name only,” said Mr. Zhang of Nanyang University. “For China’s leaders, ensuring a steady supply of aquatic products is not just about good economics but social stability and political legitimacy.”

But as they press toward other countries, Chinese fishermen have become entangled in a growing number of maritime disputes.

Indonesia has impounded scores of Chinese boats caught poaching in its waters, and in March last year, the Argentine authorities sank a Chinese vessel that tried to ram a coast guard boat. Violent clashes between Chinese fishermen and the South Korean authorities have left a half-dozen people dead.

For Beijing, the nation’s fleet of fishing vessels has helped assert its territorial ambitions in the South China Sea. In Hainan Province, the government encourages boat owners to fish in and around the Spratlys, the archipelago claimed by the Philippines, and the Paracel Islands, which Vietnam considers its own.

1 thought on “China’s Appetite Pushes Fisheries to the Brink”